Rising to the Challenge

This week at Parkinson’s Queensland we are celebrating Queensland Seniors Week 2016 and showing the world what it means to be a senior in 2016. Our members get up to some wonderful adventures and prove that whatever your age, you can achieve anything you set your mind to. We will be sharing some of our stories from our community over the course of the week to show Queensland, Australia and beyond that life doesn’t stop at 60! In the theme of Seniors Week –

“Its on for young and old!”

Like many of our members, Matt Newport was not about to let a Parkinson’s diagnosis get in the way of his living a full and exciting life. Matt has been a member of Parkinson’s Queensland since 2014. Here is the tale of one of his most recent adventures. 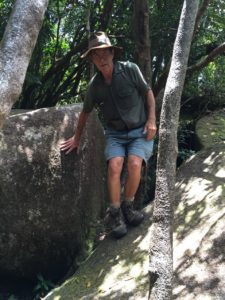 mber 2015 I took on the challenge to climb Mt Bartle Frere in memory of my son Jamie with all funds raised going to Parkinson’s Queensland Inc.

Mount Bartle Frere is the highest mountain in Queensland at an elevation of 1,622 metres (5,322 ft). The Aboriginal name for the mountain is Chooreechillum. It is located 51km south of Cairns in the Wooroonooran National Park. The foothill to summit is entirely covered by rainforest.

I was diagnosed with Parkinson’s disease at 62 which was 6 ½ years ago. I was totally exhausted and experiencing stiff muscles, mainly on my left side. Once diagnosed I had an explanation for physical issues such as excess saliva, dry eyes, frozen left shoulder and left wrist, as well as walking issues. I started medication with immediate relief. With a bit of trial and error with medication I was pretty well back to normal. As many of you would know, the first 5 years after diagnosis is sometimes known as the honeymoon period. The medication is not quite as effective as time goes on. Parkinson’s disease is different for each sufferer and progresses at different rates and intensity.

When I was first diagnosed I was in denial for a while, but as time went on and I retired at 65 I became aware of a number of other people in my area who were also diagnosed. In January 2014 with the support of Parkinson’s QLD I became the Coordinator of the then newly formed Tolga Parkinson’s Support Group. In addition to our regular meetings, as an extra activity of the group, I started a bi-monthly senior’s afternoon of entertainment with local volunteers (including myself playing the keyboard).

I am a firm believer of ‘use it or lose it’ and have become very active trying to fit 2 days’ worth of life in every day. To do this I start sometimes as early as 4am and don’t stop until about 6pm. I ride up to 10 km daily, collect and repair push bikes, have collected about a dozen old organs and currently have 6 working ones to play on. I play up to 2 hours most days which has helped in my fine movement and hopefully my brain. I also work in the garden and am writing memoirs of my time working in the rainforest timber industry.

There are two reasons I took on the challenge to climb Mt Bartle Frere. My son Jamie passed away in February 2015, he desperately wanted to get fit and healthy and challenge me to a walk up Mt Bartle Frere. He was unable to do it. I completed the walk to his honour and memory. The second reason was to challenge myself to demonstrate that a Parkinson’s diagnosis is not necessarily the end of the road. One door closes and another opens.

I was rewarded by public support raising almost $2000 for Parkinson’s Queensland.